22nd ICHS ST25: Role of Religious Studies in the Understanding of Ancient Histor

“The Role of Religious Studies in the Understanding of Ancient History” as Specialised Theme 25, 22nd International Congress of Historical Sciences 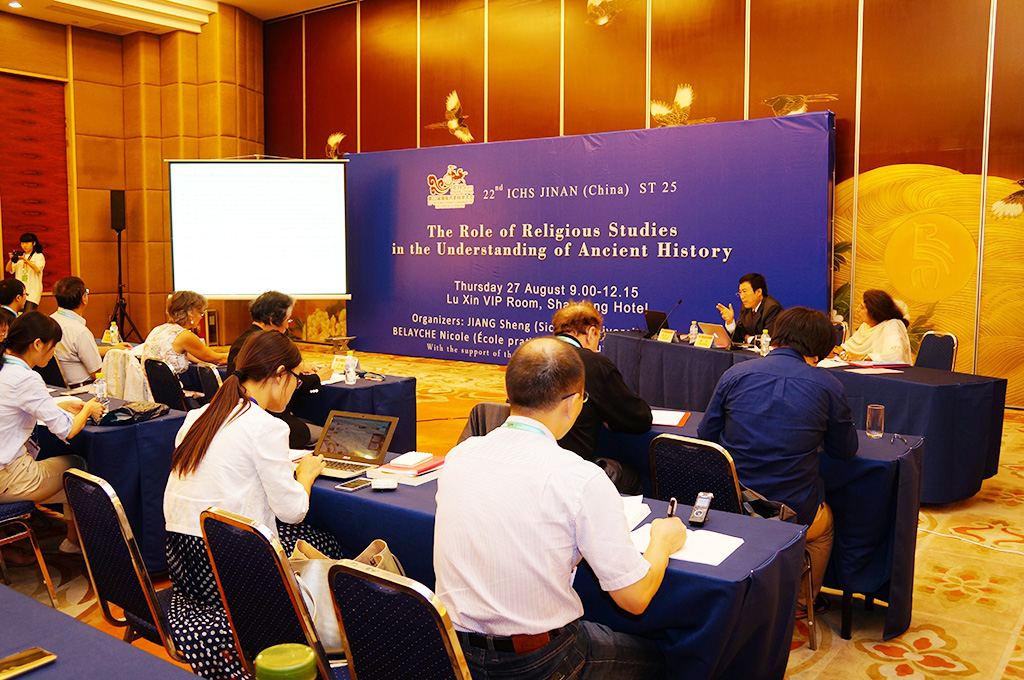 On August 23~29, 2015, the 22nd International Congress of Historical Sciences was held in Jinan, China. As Specialised Theme 25 (ST25), The Role of Religious Studies in the Understanding of Ancient History was proposed by Dr. JIANG Sheng姜生, Professor of History at Sichuan University, through Association of Chinese Historians. JIANG Sheng and Nicole BELAYCHE acted as organizers of ST25. Seven speakers from around the world gave presentations. Eight candidate speakers also submitted their papers as well. There were over one hundred scholars attending ST25.

At the beginning, JIANG Sheng set forth the major issue and objective of ST25. For many modern people, religion—both in the past and at present—has become an external objective cultural phenomenon, which has caused misunderstanding of many historical processes and archeological findings in historical fields, though it seems no problem in other fields. Historians should not become historical dust collectors. Instead, they should rediscover their duty from José Ortega y Gasset’s statement: “Man, in a word, has no nature; what he has is … history. Expressed differently: what nature is to things, history, res gestae, is to man.” The aim of ST25 was to promote the role of religious research in the understanding and explanation of ancient history, to cure the “visal defect” toward ancient history caused by negative critique and discrimination of religion in modern times, and to have history go back to its own greatness as well. 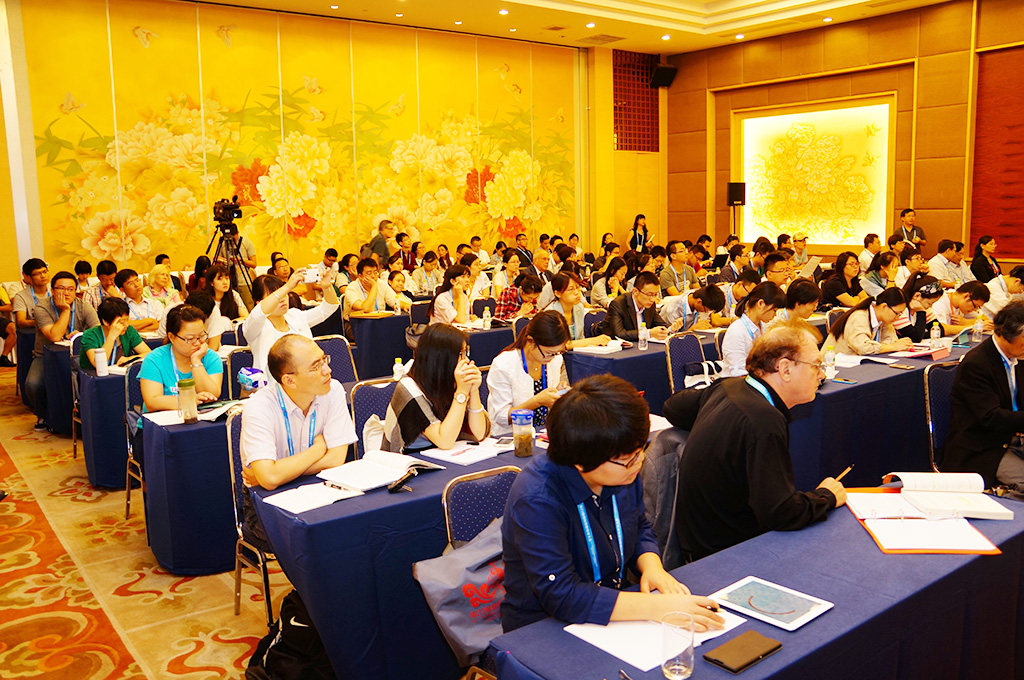 MIURA Kunio (Daito Bunka University & Sichuan University) gave a presentation on Chinese “religion”. He pointed out there were no Chinese terms that completely matched the Western “religion”. “Zong Jiao, 宗教” used now came from ancient Chinese literatures during the nineteenth century when the western culture was introduced into the eastern world. However, China had its unique Zong Jiao culture. He defined “Zong Jiao” as how to think about and deal with “death”, a topic concerned all around the world. He concluded that characteristics of Chinese “Zong Jiao” lied in the system of “Jiao, 教” based on the integration of philosophy and religion.

LU Zong-Li (Hong Kong University of Science and Technology) discussed “the Concept of Devine Restribution for Good and Evil Deeds in Early and Early Medieval China”. During pre-Qin, Qin and Han Dynasties, the theory of doing good deeds was based on the idea of “good deed brings fortune, bad deed brings misfortune”. Nevertheless, this idealized belief failed to gain traction because life and Heaven’s will was unpredictable, and good deeds were often followed by misfortune in real world. A concept of divine retribution for good and evil deeds that relied on a mechanical and deterrent design emerged in the Confucian apocrypha and early Daoist doctrine from the 1st century BCE to the 3rd century CE. This concept was characterized with divine inspecting and registering, and heavenly rewarding-publishing for good and evil realized by immediate extending or reducing of individual’s duration of life. Therefore, early China was an age at which beliefs in deities, ghosts and spirits were popular and fears of natural and supernatural powers were common. The belief was comprised in both Daoist and Buddhist, especially in the popular Chinese Buddhist apocrypha in 5th and 6th centuries.

Anne-Françoise JACCOTTET (University of Geneva) suggested that the very identity of Athens was represented in a very distinctive way, by divinization of Demokratia (Democracy) and Demos (People). As a state cult, it expressed society, in itself, irrespective of the historical and political twists of fate that might be favouring or limiting the international outreach of the city. It’s a cult, which expresses the identity, the identities within history, beyond history. In order to allude to and extend José Ortega y Gasset and his phrase “History is what we are”, to the perspective of antiquity: “cult is what we are”, in an inseparable way. In Athens, where democracy is not thought of as an accident of history but as being truly the very identity of the city and its citizens, “Democracy is what we are”.

LIN Xin-Yi (Columbia University) suggested to reconsider Blood Bowl Sutra from the perspective of religious healing, in addition to the approach of cultural indigenization. By situating this text in the context of contemporary Buddhist gynecological healing resources, she found that medieval Chinese Buddhism actually provides numerous resources for addressing various female reproductive issues that few scholars have touched upon previously, including: seeking pregnancy, difficult childbirth, postnatal care, and abortion and underworld punishment.

FENG Yu-Jie (Sichuan University) pointed out hermits in the late Eastern Han acquired knowledge both from Taoism and Confucianism. What they popularized was Taoism ideas related to Province (天命) of Hanjia, such as Tuchen (图谶), Astrology, Divination, et al. These sage-hermits enjoyed a high reputation, and were admired and trusted by the public and even some scholar-bureaucrats. Therefore, sage-hermits were endowed with a unique religious symbol and carved on stone in Han tombs, to help the dead become immortals. As a result, hermits actually directed local systems of ethic value in the late Eastern Han, deeply influencing the regime change from Dynasty to Wei.

JIANG Sheng questioned previous guesses and misunderstandings of the T-shaped silk painting from Han Tomb NO. 1 of Mawangdui in Changsha. Based on early Taoism literatures, he found the “nine suns” on the painting was a breakthrough to understand the whole painting and even the tomb as well. He gave a complete explanation of this silk painting: According to an early Daoist religious text, “all the nine suns will shine in the east when the nine heavens open”, which symbolized the immortalization of the tomb occupant, ascending to the highest world of immortals–the ninth heaven. Myths of Bohai Sea and Penglai Island at the bottom, and Kunlun Holy Mountain in the middle indicate beliefs from inland holy mountains and blessed islands on eastern seas, along with beliefs of Yellow Emperor and Lao Zi Taoism, becoming immortals through death and Xuan-tian God met and integrated at the beginning of Western Han Dynasty, composing the belief system of becoming immortals after death during Han Dynasties.

GU Luan-Zhai (Shandong University) talked about the consciousness of rights in Christianity in medieval western Europe, which brought Christians not illusionary but real boon. The consciousness of rights in Christianity makes not autocratic but relatively democratic regime take shape in medieval western European states. When it comes to “Divine Right of Kings”, the political power was distributed partly to the church in Medieval Western Europe, hence, royalty was counterbalanced, while the oriental countries were obviously different.

The eight candidate speakers and their topics were:

CAI Lin-Bo (East China Normal University), Gate to Heaven：A New Explanation of the Painting of the Inner Coffin from the Tomb of Marquis Yi of Zeng

TAN Jing-Yu (Shandong University), The Influence of Science and Technology in Taoism on Daily Life after the Song Dynasty: The Case of Alum Application

TAN Min (Southwest University for Nationalities), The Transformation from the Age of Mythology to the Age of Immortals: The Religious and Cultural Value of “Biographies of the Immortals” (Liexian zhuan)

ZHANG Qi (Sichuan University), A Textual Study of the Belief of Town-god in Early Times

On these fantastic topics, active discussions happened. About 120 scholars joined the ST25’s hot topic, making it the largest specialistic theme of the 22nd ICHS. Undoubtedly, ST25 was a great try to reconstruct the role of religious studies in ancient history research, just as ICHS Secretary General Robert Frank put it in the email to JIANG Sheng: “… it would be nice that the nice question you put in the title of ST25 may be the leading question in mind of everybody during the session: how does Religious studies make us understand better Ancient History of different parts of the world? How does History of Religions make us understand better these Ancient worlds?”